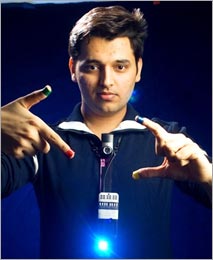 Education
Who Is Pranav Ministry
Pranav Mistry, the inventor of revolutionary Six Sense technology is a well known name amongst the youth of India. In fact, every graduate of India dreams to be at the same height like Pranav Mistry. The magical Techno-Freak from India has gained a world wide admiration with his astounding works in the fields of technology. Frankly speaking, Pranav's thinking starts a thousand kilometers ahead of the point where the human imagination ends. His latest gadget and a bouquet of numerous exciting and surprising inventions have taken him to sky heights. Pranav's Magic - 'The Sixth Sense Technology'
The exceptional Sixth Sense Technology is a lively example of Pranav Mistry's designing genius. This super technology enables you to use the whole world as an information source. 'Sixth Sense' is a wearable gestural interface that augments the physical world around us with digital information and lets us use natural hand gestures to interact with that information. Now you can make a newspaper to show live video news or dynamic information, a gesture of drawing a circle on the user's wrist projects an analog watch and display someone's personal details at first sight that too on his face.
A simple mobile like device and a pendant can make use the whole world for scribbling. Click pitcures with your gestures. Display detailes on a wall or anywhere you wish to. The camera, projector and the processor will enpower you with the Six Sense Technology

Third Eye - His Forthcoming Revolutionized Technology
The designing genius is currently working on a project called Third Eye which will enables multiple viewers to see different things on a same display screen at the same time. Single sign boards will display information in variant languages at the same time. Two people watching TV can watch their favorite channel on a single TV screen. The world is awaiting this exceptional invention.